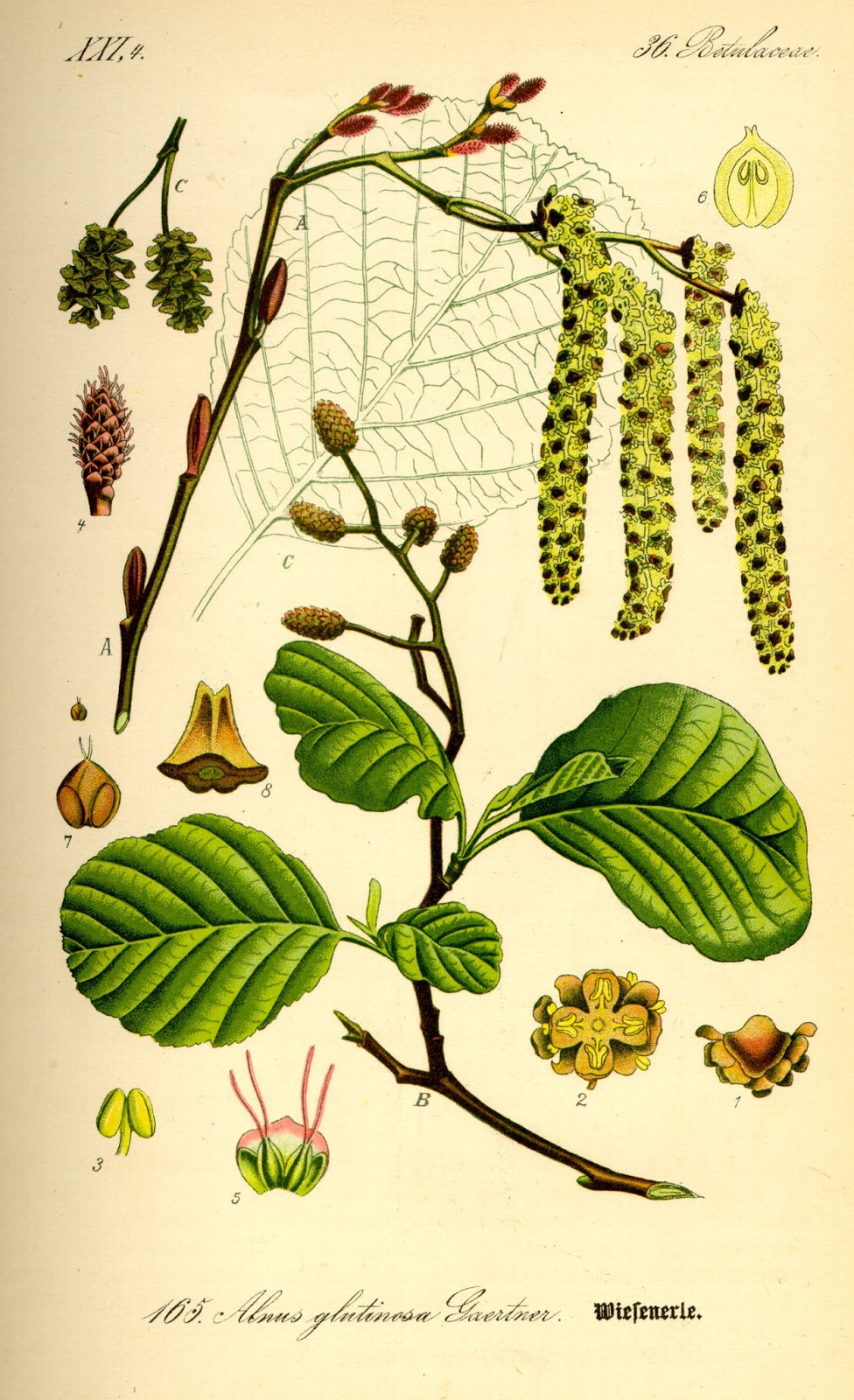 Alder, well thought id carry on the tree theme, and with all the wet weather we have had, Alder sprung to mind! It is a member of the Birch family and is a tree that likes to live near water, quite often, so close that its roots are partially exposed by the flow of a river. Along with snow drops and hazel catkins, Alder adds a nice splash of colour to our landscape this early in the year, it produces some long and hanging almost red/purple female cones along with pale green/purple male catkins.

Its Latin name is Alnus Glutinosa, the latter part of its name probably stems from the the young buds ands leaves being fairly sticky when young as Glutinosa translates to stickiness!

At first glance it may not appear to have anything of use to the forager, but on closer inspection, it is actually a very valuable tree.

Medicinally the Alder is very astringent and the bark can be used as an anti inflammatory, a tea made from the inner bark of smaller branches or the dried buds and chewing small amounts may help relieve Diarrhoea and a tea made of the bark can be gargled against a sore throat. Overdoing it may cause vomiting however and using dried bark is best.

As a firewood alder is pretty poor due to high water content, but it will season quickly. It is very resistant to decay in water, and has been used for water piping, troughs and piles under bridges. Much of Venice was built on Alder Piles! Most parts of the tree can been used to create a natural yellow dye and it is brilliant for making charcoal as it burns with an intense heat and was used by the Celtic to forge weapons. 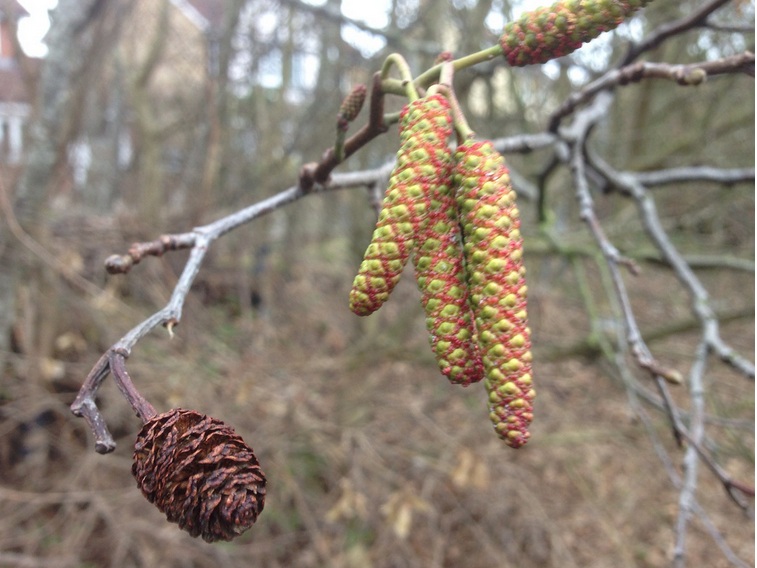 To make sure you have identified Alder correctly, there are a few helpful key features. most obvious is that it will have both male catkins and female cones on at the same time (as above) The male catkins look almost similar to that of hazel sometimes smaller, whilst the female organs look similar to tiny open pine cones but are approx 2cm in size. Another helpful clue is the orange lichen that grows on the bark. It's leaves look similar to that of hazel, with a much less pronounced tip, in fact it almost looks blunt and square like. Of course a huge give away is its proximity to water!

Early spring the tree will produce catkins, that some say are edible. Certainly the Red alder of the USA is edible, but what of our own version. I new of a few trees local to myself (of course next to water!) and also I spotted one more that had been planted, I'm sure during my local towns development (very handy my towns planning as its provided me with plenty of sea buckthorn too!) There road side tree is possibly a different variety of alder or it could be due to its sheltered location, be in a more advanced stage of spring growth. On the left is the town Alder catkin, the right is the "wild" Alder

Fresh both are very astringent and unappetising , the wild catkins much firmer.
I would give both the same treatment, simmering in changes of water until the yellow that leaches from them reduces. therefore reducing the astringency. However at this point, I thought it better to concentrate solely on the 'wild' catkins, seeing as i was unable to be sure that the town one was the same Alnus Glutinosa and in so be pointless to experiment with as not many people would have access to the same! Anyway continuing with the wild catkins once boiled in changes of water I thought a good test of its edibility would be to dry and then grind to a flour for use. As there was only a hand full of each the amount of flour produced was little, so enabling me to make something worthwhile, I added an equal amount of Rye flour, shaped it into a small biscuit round after adding water and baked it.

The resulting cake was fairly pleasant. It had the texture of (and you will only understand this if you are a dog owner) a dog treat!..Perhaps a Bonio??, that's not to say it had a meaty taste, but the texture was gritty and bland, however more pleasant than expected. It still retained a hint of bitterness that lingered but not unpleasant. More like the bitterness of unsweetened coco powder (if you have ever tried that!)  On the whole, considering its questionable pallatibility, It came out quite well! in fact much tastier than flour I have attempted to produce from Cattail roots so I was happy with the results!! A success almost, I just hope that the nutritional benefits are similar to its American cousin, Id hate to think id wasted everybody's time! 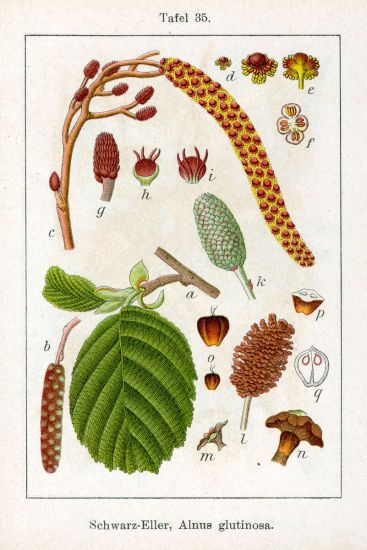